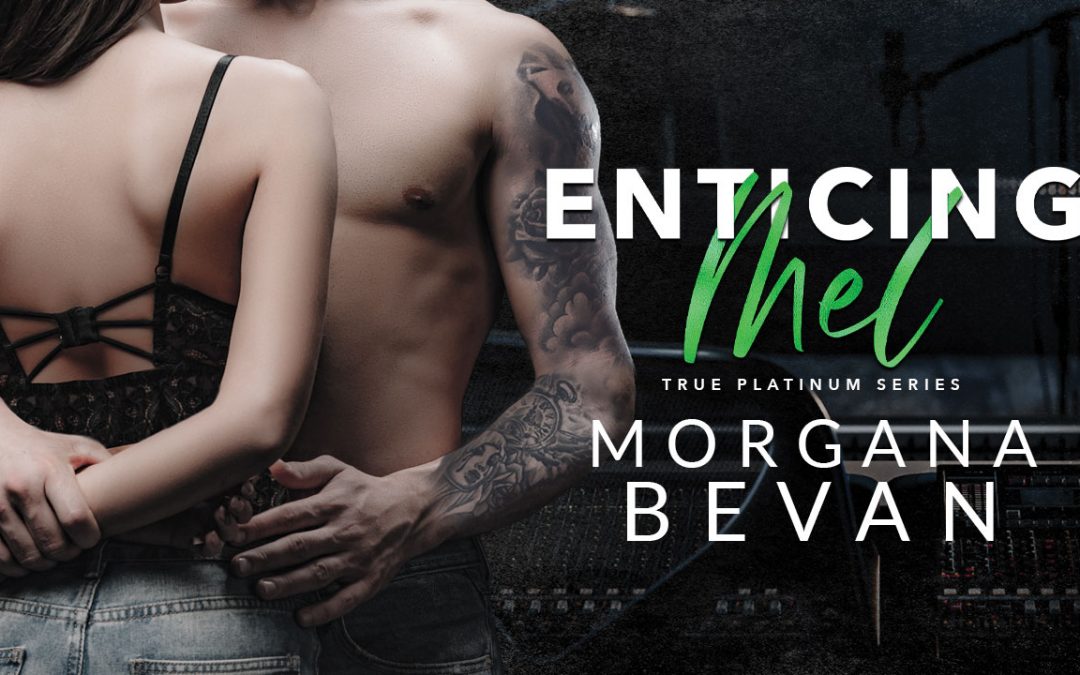 What happens when your past catches up with your present? I’m not sure I want to know.

Five years ago, my childhood sweetheart left me with more than a broken heart as his band rose to stardom. I’ve tried to move on and build a life without him.

I should’ve known the peace wouldn’t last. Eventually, his band would come home, and I’d be forced to face the dreamy bassist who still owns my heart. But I’ve been hiding something and my secret is about to be revealed.

As much as I don’t want his flaky lifestyle impacting my daughter — our daughter — I can’t lie anymore. Dan still makes my heart flutter and steals my breath.

He’s sure we can pick up where we left off now that he’s not touring. But I’m not the carefree girl anymore, and I’m not sure I can let him in again, not when someone else’s heart is on the line.

Will I listen when my head says no? Or will he be able to entice my heart once more?

Enticing Mel is a steamy rock star romance. It’s the third book following the Rhiannon men and the third in the True Platinum Series. Can be read as a standalone.

If you love obsessed rock stars and childhood sweethearts getting a second chance with a secret baby keeping the heroine on her toes, then Enticing Mel is for you.

What Readers Are Saying

From the cover and title alone, I was only expecting a sexy and steamy read, but you actually get SO much more than that! There were tender and realistic moments in this that brought literal tears to my eyes.  – Jess 5 stars – Goodreads

This was an excellent read for me. The book took me on an emotional roller-coaster, caught my attention from the first chapter, and the author created a believable and credible story, as she does with every book in the True Platinum series.
The characters were realistic, each with their own set of ideals, viewpoints, and dialogue that suited their personality.
I thoroughly enjoy reading any of Morgana Bevan’s books because they are memorable, interesting, and very entertaining.
A definite must read. I recommend that you add to your TBR list today. – Emmie, 5 stars – Goodreads

This was the first book that I have read by Morgana Bevan and all I can think is WOW, I loved the characters’ interactions and problems that seem real and relatable. It’s an easy romance read that I couldn’t put down. I would definitely recommend it. – Adrianna, 5 Stars – Goodreads

A Taste of Enticing Mel

“Because it’s been five years. I’ve been there, done that, and moved on.”

I crossed my arms and glared at him, not trusting his crestfallen look for a second.

“As if that changes anything.” I glared at him.

“But it does.” He took a step closer. “The distance isn’t an issue any more. We can make this work now.”

My brows shot up at the conviction in his voice. How could he honestly think the distance had been the only problem between us? He’d barely talked to me. If he wasn’t in town for one reason or another, I didn’t hear from him. We went months without contact. That was not a relationship.

His jaw dropped and I had to glance away to avoid the sharp stab of pain in my chest at his sharp intake of breath.

“I don’t believe you,” he whispered, forcing himself to straighten.